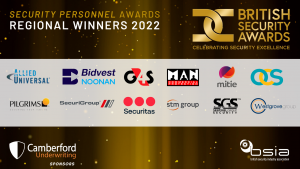 The British Security Industry Association (BSIA) has announced its regional security personnel winners for 2022, recognising security officers across the United Kingdom for their commitment to keeping people and property safe.

The BSIA’s regional security personnel awards are part of the Association’s British Security Awards, which returns to the London Marriott Grosvenor Square on 29 June. All regional winners will now go forward as national finalists.

For over 20 years the regional awards, sponsored by Camberford Underwriting, have recognised the talent, dedication, skill and bravery exhibited by security personnel in their roles. In 2022 the five categories, Best Newcomer, Best Team, Outstanding Act, Service to the Customer and Security Manager of the Year saw a record number of entries.

Mike Reddington, Chief Executive, BSIA said: “It is our honour to be able to recognise through the British Security Awards each year the work of security officers across the United Kingdom for their role in keeping people and property safe.

“This year’s winners should be immensely proud of their achievements, and we wish them the best of luck as they now go forward to the national finals of the British Security Awards.”

The 2022 regional winning companies are:

A full list of the winners can be found at www.britishsecurityawards.co.uk/security-personnel-2022

The security personnel categories of the British Security Awards are sponsored by Camberford Underwriting.

The British Security Industry Association (BSIA) has launched its latest code of practice, an industry-first for securit...
Read More

GMB is to ballot more than 1,100 G4S Cash members for strike action over what they believe to be a real terms pay cut.  Workers are report...
Read More
Subscribe to our newsletter