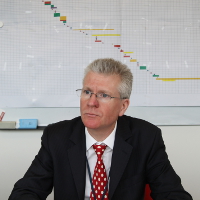 On Alan Clamp’s experience as a Regulator…..
“I suppose broadly speaking I’ve been working full time in regulation for about fifteen years. The first ten of that was in the education sector, mostly within Ofsted. During this time I was looking at the whole remit of what they do, education and training quality, qualifications, early years, children’s homes, schools, colleges, prisons and anywhere there is educational training going on. I had two or three roles at Ofsted and then I moved to become the chief executive of the Human Tissue Authority (HTA), a specialist regulator in the health sector. I did that role for about four and a half years before stepping in as Chief Executive at the SIA in June of last year.

“I have dealt with a lot of regulation as you can see from the past fifteen years, although they were in different sectors, education followed by health, there are always common themes in regulation. It’s about getting the balance right, about benefits and burdens but also in terms of the governance of the SIA. When I was with the HTA it was an authority, meaning I had a board and we had a sponsorship arrangement with the Department of Health. That is very similar to what I have now with the Home Office, a lot about that sort of process which is familiar. It is the context of the Private Security Industry however which is a bit different.”

On Alan Clamp’s first impressions of the Security Industry….. 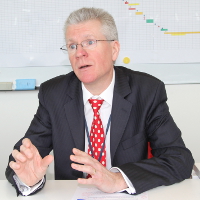 “Since I joined the SIA I’ve met a wide range of stakeholders, including on an informal basis. I’ve been to the West End and talked to door supervisors working on the doors and asked questions such as: “How did you get into this?”, “How did you find the process of getting your badge?”, “What did you think about the training?”. I found the feedback very useful. Then in contrast, I’ve met with representatives from the big companies. I’ve met trade bodies and trade associations, the BSIA for example, and others. They’ve all been very welcoming, enthusiastic, focussed and supportive of the Regulator.

“There is a strong drive amongst most in the industry for higher standards, creating more of a profession in the private security industry, and wanting to support the SIA in our remit around better public protection. In addition, I think within all of that there is a legitimacy which comes with being part of the industry. There is a good group within the private security industry that desire recognition.

“Upon reflection, however, it may be that I’ve come across less of the non-complaint, the ones that actually want to work around the system. I am aware of their existence through working with our Partnerships and Intervention Teams and talking to the Police and HMRC. I’ve had less direct interaction with the non-compliant but to a certain extent they may be avoiding me, or avoiding the Regulator so to speak. People do expect us to have a very close look at those and deal with them.

“From my perspective overall, the experience so far has been very informative and welcoming. There’s obviously a lot to learn, but people have been very generous in that. In addition to being supportive of regulation, numerous people that I’ve been in contact with have said, either anecdotally or generally, how much things have improved over the last fifteen years at the SIA and how the world is a very different place. That has all been very positive feedback in terms of the improvements made by the SIA, as well as being able to reflect on that, and being able to share that with the people that work here. Another thing I say constantly about many things that I’ve done, particularly about a role like this, is that it’s a privilege to be able to do it. So for me it’s all been good.” 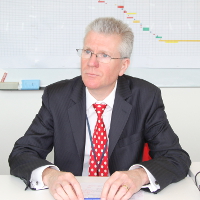 Alan Clamp on developing higher Quality Standards…..
“I’ve picked up from your articles on Infologue.com about those that want to operate at a higher standard. With the ACS existing as it does, there is what we would deem to be an appropriate standard of entry from a state regulator to ensure that people are above the bar. You can then use scores to estimate how far above the bar you are. I can quite appreciate, how within the industry, people want to differentiate themselves. I am aware that a number of the trade organisations have talked about, and continue to talk about, differentiation, whether it be ‘Bronze – Silver – Gold’ or some kind of segregation within that.

“It’s an interesting debate whether once you get above that line that it is the direct role of a Regulator. My perspective is that it’s more the role of the industry. We would however want to work hand in hand with them to help develop those standards and to recognise them. If we’re going to be proportionate risk focussed, if there is a ‘Bronze – Silver – Gold’, and we know there’s a gold company out there who has been assessed to these standards, and we’ve got some faith in that assessment process, then our approach to them can be a bit of a lighter touch. Overall I can understand why, over and above the ACS zero, the industry would want some sort of differentiation, particularly as you get to gold.

“I think the issue with ACS scores is, certainly when they’re close to each other, I wouldn’t want to hand on heart say to a company that they’ve got 150, and someone next to them has 145, and that that is a whole lot of difference. 140 and 170 tells you something compared to 0 and 30 but it is, as I say, a bit of a crude measure and I think the other way is therefore a kind of ‘Bronze – Silver – Gold’ differentiation or higher and lower bars. I believe that would be easier for people to understand. This links as well to the way that we work with buyers to make them aware and we’ve already started to do more in this respect.” 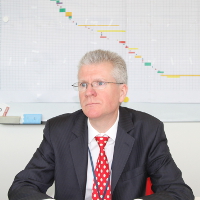 Alan Clamp on Compliance to Commitment…..
“It’s good that there is support for regulation in the industry and I’ve often talked about regulation where organisations or individuals move from compliance to commitment. In other words, they follow the rules because they think they have to, whilst others ensure they comply with the rules because they genuinely believe in higher standards. What I get played back from stakeholders in the industry is that there are a lot in that latter camp.”

On interaction with the Security Industry…….
“What I’d like to do, and this is actually a specific objective for the next business year that we’re just about to consult on again, is set up a new group. My working title is a strategic advisory group rather than consultation group, however it doesn’t make much difference. We need to think carefully about who needs to be around the table, but it would involve us and the Home Office and its focus should be about improving standards, better public protection and everybody doing their job better. If business licensing becomes part of that advisory group, or recommendations for the review thereof get fed in to it then that will be good. However, I’d just like it as a stakeholder group, a sounding board, suggestions, constructive dialogue, ideas, mutual support, teamwork, all those sorts of things.

“As I say, it is a specific objective now and I would hope to be able to have something up and running, at least an initial meeting, in the summer of this year. At that time I would like it to have a particular focus on perhaps three of four areas, such as training, working with buyers and violence reduction, that kind of thing. Through this I think everybody will get something out of it, rather than it being us asking people to help us through some kind of political minefield.”

Alan Clamp on developing a strategy for procurers of security…..
“We’ve currently got a new strategy with buyers. We’ve got our first meeting in March with public sector buyers and then we’re meeting with private sector buyers, procurement agencies and so on after that. We’ve started to develop almost a checklist for buyers in response to requests from companies in Scotland who said “If you are going to go and buy private security, here’s 12 questions to ask when you’re round the table or when you’re looking at tenders”. Something to consider here perhaps is, if those companies are telling you about their ACS scores, here’s just a little bit of information about how the numbers add up and the standards and so on, just in case they’re not too informed about that. One of the key things for us with buyers is making sure that they are informed. Undoubtedly there will still be some out there who buy at a very low cost and know they’re buying something which is probably sub-standard. We therefore need to think of a different way of working with them. Somewhere in the middle, there’s probably a group who are practically informed or not informed at all about what it is they’re buying and I think it’s definitely one of our jobs to do more in that area.”

On the relationship between the SIA and HMRC…..
“Essentially it is an information sharing gateway. Currently we are permitted under our Act to share information directly with HMRC to help them do their job. There are limitations however on what they can share back with us and in order to resolve that we need to have something written into the legislation which permits it. Some organisations, for example the Gangmasters Licensing Authority, have already got it written in the legislation and we are pressing to have the same. It will help us do our job and that something we are keen to have. HMRC are quite happy to share that information with us but they need the law on their side and we are currently exploring two different pieces of legislation, which we will be going through in the next session, to see if it could be put in to either of those. It should be straightforward but there are a lot of pieces of legislation, a recent one being Policing Bill for example, which end up getting described as a “Christmas Tree Model”. This is so-called because everybody is hanging so many bits on them, meaning that you essentially have to compete with others to get it in there. My perspective is that it’s very simple. It’s easy to enact and it would make a big difference to what we can do and it should be a high priority for the Home Office with their objectives. We will therefore continue to press on that front and it shouldn’t be an issue. If there are other buttons that we can press to get that through then that would be great, but it really would enable us to do our job better.”

In Part Two of the Alan Clamp Infologue.com Big Interview, Alan gives his views on training, development and career development in the security industry.

All rights reserved. Infologue.com is a Interconnective Ltd business.