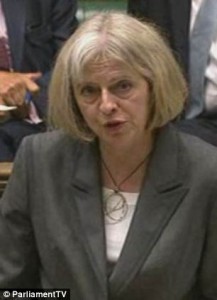 Terror suspects and hate preachers will be stripped of their benefits, Theresa May told the Commons yesterday.

That was one of a series of lessons the Home Secretary vowed to learn from the twelve-year battle to deport Abu Qatada, whose family have received more than £500,000 since he arrived in Britain.

The Home Secretary was cheered by Tory MPs as she confirmed that the fanatic had finally been put on a plane to Jordan.

She told the House that Work and Pensions Secretary Iain Duncan Smith was already examining ‘how we can curtail the benefits claims made by terror suspects and  extremists whose behaviour is not conducive to the public good’.

Hook-handed cleric Abu Hamza cost the taxpayer £338,000 before he was extradited to the USA last October and fellow hate-preacher Anjem Choudary, who gloated at the murder of Drummer Lee Rigby, pockets an estimated £26,000 a year in benefits.

Mrs May said she was determined to tackle the ‘crazy interpretation of our Human Rights laws’ that had allowed Qatada to frustrate the deportation process for so long. She said that the saga had cost taxpayers £1.7million.

‘I have made clear my view that in the end the Human Rights Act must be scrapped.’ She said that the forthcoming immigration Bill would make it easier to remove foreign nationals and reduce their ability to prolong the process with ‘spurious appeals’.

Mrs May also suggested she wanted to curb the availability of vast sums in legal aid that funded Qatada’s battle to avoid deportation. She said that around £430,000 of Qatada’s legal fees were paid by the taxpayer, while many other foreign nationals the Government is trying to remove have their legal costs paid in full by the public.

Tory MP John Glen suggested Mrs May should go further and deport Qatada’s wife and five children.
Mr Glen said: ‘It is indefensible that he and his family were able to claim benefits for so long, and disappointing they were not on the plane with him.’

Mrs May replied: ‘They will have a decision to make about where they see their future.’

But Mrs May reserved her fiercest criticism for the European Court of Human Rights, which she accused of ‘moving the goalposts’.

‘We must also consider our relationship with the European Court very carefully, and I believe that all options – including withdrawing from the Convention altogether – should remain on the table,’ she said.

Mrs May had been criticised by some Conservative MPs for deferring to European Court judgments. Yesterday she affirmed she had been right to do so, but acknowledged Qatada would have been deported ‘long ago’ had the court not established ‘new, unprecedented legal grounds’ to block it.

Qatada was only deported after Britain negotiated a treaty with Jordan guaranteeing that he would not be subjected to torture and evidence obtained by torture would not be used against him.

He has been charged with plotting Al Qaeda-inspired terror attacks and detained in a prison in Jordan’s capital Amman.

Charges faced by Qatada relate to a foiled plot against the American school in Amman and an alleged attack on Israeli and American tourists during New Year celebrations.