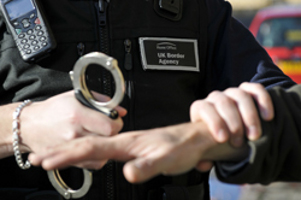 A joint operation between the UK Border Agency and Metropolitan Police and has led to eight major gang members being deported back to their home countries.

Operation Bite identifies high harm individuals, many of whom are foreign national gang members, that the UK Border Agency steps in to detain and remove using immigration powers. A number of serious offenders involved in robbery, murder and kidnaps have been removed and several others placed in immigration detention while steps are taken to remove them.

Dozens more gang members, as well as other ‘high harm’ offenders such as drug dealers, predatory sex offenders, firearms suppliers and those involved in kidnap and ‘threat to life’ cases are being targeted.

As highlighted in the Home Office’s Ending Gang and Young Violence strategy, the intention is to expand this approach to other areas around the country.

‘By sharing intelligence, knowledge and expertise we can use our immigration powers to remove these dangerous individuals from the country, making the streets of London safer for law-abiding citizens.’

Superintendent Stuart Dark, Metropolitan Police lead for Operation Bite, said: ‘The individuals we pursue are lightening rods for violence. Our aim is simple, to control and then deport them before they can commit even more serious crimes, thus protecting the law abiding majority from future harm.