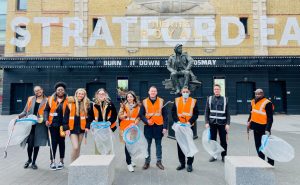 In collaboration with Stratford Original, STM Group (UK) Ltd was joined by Newham City Council and other local businesses, in litter picking around the local Stratford community, cleaning the streets of rubbish and participating in the #BigBagChallenge.

Lasting from 25th March-10th April 2022, the Great British Spring Clean (hosted by Keep Britain Tidy) is a national movement, targeting individuals and organisations across the country, whilst challenging them to act in order to help keep Great Britain clean.

Beginning in 1950, when The National Federation of Women’s Institutes passed a resolution to “Keep Britain Tidy”, the organisation has taken some remarkable, and monumental, steps to push for a cleaner Britain ever since. This has included the implementation of The Environmental Protection Act in 1990, and actively encouraging The Clean Neighbourhoods and Environment Acts to introduce fixed penalty notices, for littering, in 2005.

Back for its seventh year, the theme of the Great British Spring Clean was simple – join the #BigBagChallenge and pledge to pick up as much litter as possible, throughout the course of the campaign.

The work that Keep Britain Tidy undertakes in creating and supporting the #BigBagChallenge is critical to a healthy environment, both within local communities and the wider country. There are some facts about the extent of the litter problem within Great Britain including:

Working in partnership with different organisations across Stratford, a wide-range of STM representatives joined together to set out on a morning of litter picking within the local community – ultimately filling a total of 15 bags.

STM Group (UK) Ltd has announced the appointment of Victor Ubogu as a Brand Ambassador.  Vic is well known as a former Bath a...
Read More

*Press Release* On Wednesday 25th November, STM Group (UK) Ltd was named as winner of the ‘Security Project of the Year’ Award at the IFSEC Annual Securit...
Read More

STM Group (UK) Ltd named “Business of the Year” at the British Sec...

On Friday 3rd July, STM Group celebrated being named ‘Business of the Year 2020’ at the annual British Securit...
Read More
Subscribe to our newsletter